I'm honored to speak today about my friend Aaron.

Those of you that know me will be prepared for some corny jokes.

For those of you that don't know me, my name is John. I was born one day before Aaron and we met when I was 13 years old. To give you a sense of how close we were, during my first year of college Aaron came down for the weekend to visit me in San Diego. I hadn't seen him for a while so I was really excited to catch up. I rushed back to my dorm room after my last class on Friday afternoon expecting to find him there. When I burst through the door I found this note on my desk, 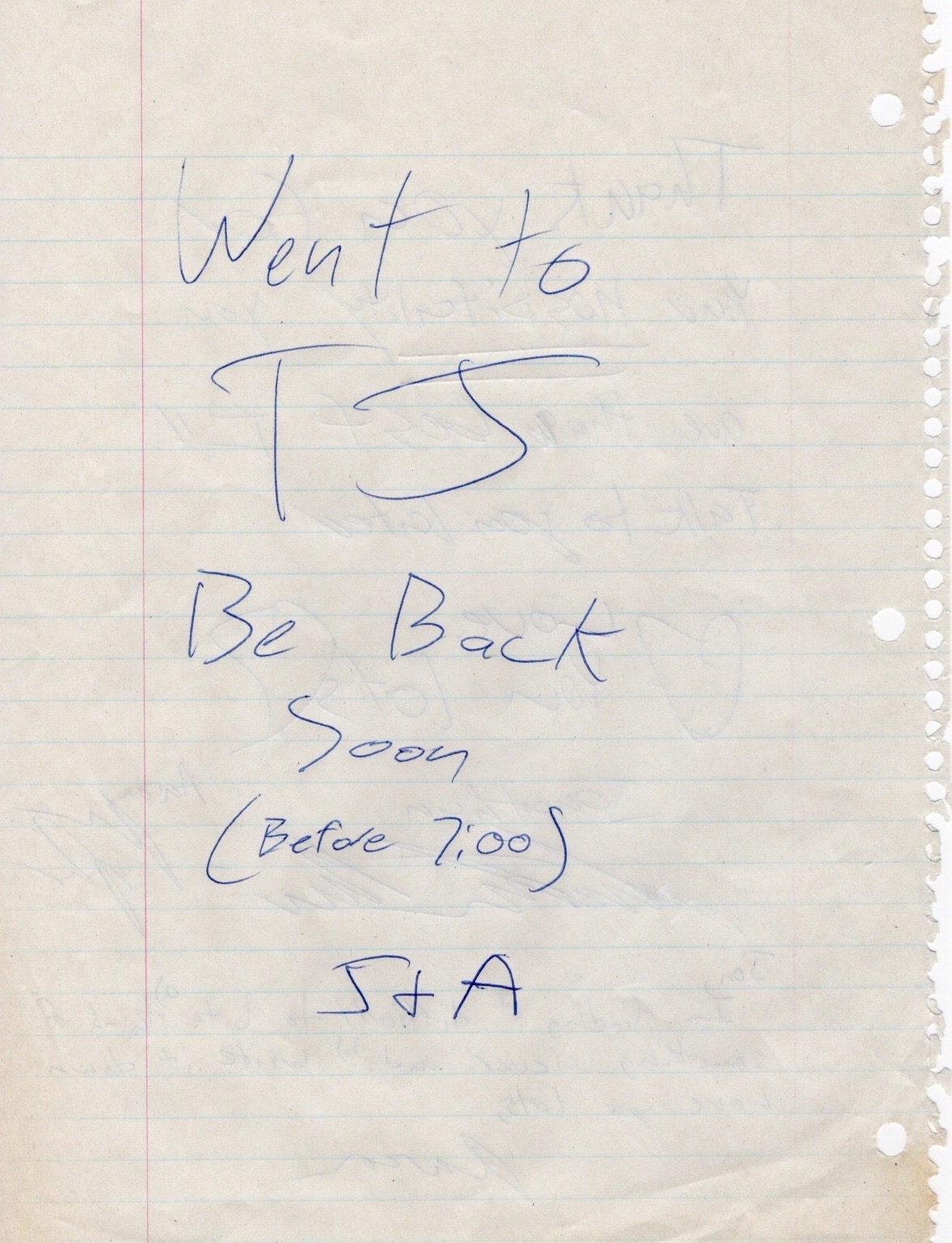 Did anyone here ever see Aaron engage in any manual labor or exercise? If you said yes, I guess swing dancing technically counts.

Aaron sent me a text once in the middle of applying at a restaurant in Venice. He described it to me as the "talk of the town since it first opened 10 years ago". Who else born after WWII besides Aaron talks like that?

Who am I kidding. I adored Aaron and the rest of the Etiwanda High School clan did too. He was fun and fascinating and kind and he made all of us feel special.

Aaron was one of my dearest friends, but I hope you aren't expecting me to explain him today. He was an enigma. He was a walking contradiction.

He wasn't just confident, he was a tour de force. But he was easygoing and humble too.

He was charming and extroverted, but he was also a lone wolf.

He was passionate and optimistic, but he didn't take himself too seriously.

He was cool, but he also listened to Oingo Boingo.

He traveled the world and loved fine dining, but he was never a snob.

He could be emotionally raw and direct, but he was often evasive.

He was charismatic and intense, but also sardonically funny.

He was a teacher and a student.

He was a great hugger. (not everything can be dichotomized)

He was utterly unique, but on paper he's almost a cliche.

I close my eyes and I'm walking a few paces behind Aaron again down Thoroughbred during Christmas 2001. If you aren't from around here, Thoroughbred is one of those streets that goes all out with the decorations. Aaron stopped at a house that was lit up entirely in blue. After 10 seconds or so the lights turned off and we found out that the entire thing was also rigged up in red. After watching the house change colors a few times Aaron burst into the kind of applause that usually signals the end of an Opera and turned back at me grinning from ear to ear. Granted, we weren't entirely sober at the time, but he did things like that on the straight and narrow too.

Aaron was just an unabashed fan of life.

It was Aaron that explained to me who Frank Zappa was, that there was actually a reason to be proud to be from the Inland Empire. I also warmly remember Aaron deconstructing the arrangement of a song from Paul Simon - Graceland for me. Even back when I thought I already knew everything, Aaron taught me plenty.

Given his musical credentials, Aaron could have easily been an insufferable pedant who looked down his nose at the rest of us and said things like, 'I prefer Philip Glass' earlier work'. But that just wasn't the Aaron I knew. Whether the song had a grand total of three major chords or was dense, complex and atonal, for Aaron it either worked and touched him or it didn't.

If the song resonated, he was always more than articulate enough to be able to explain why. If it didn't, he'd be gracious about it. He knew from experience how much courage it takes to create and share. Even if he had more talent in his little finger than the artist had in their whole body, even if they weren't present, Aaron would be kind.

This personality trait wasn't reserved to music. He was magnanimous. He wasn't judgmental of people that walked a different path. Rich/poor. Conventional/bohemian. Aaron always had more interesting things to discuss than gossip. My Aaron knew who he was, he didn't compare himself to others and he didn't tear folks down because he didn't agree with them.

I should admit at this point that there was an entire dimension to Aaron that he mostly succeeded in hiding from me. I'm not qualified to diagnose him and I'm not in a position to judge him. One thing I do know is that a towering intellect like Aaron's was a handicap when it comes to those particular battles.

I can also say that some of the choices he made tested his relationships and hurt people that he loved. Despite pushing them away, Aaron's family found creative ways to support him, connect with him, set boundaries but still offer aid over and over again. For folks with mental illness, this isn't a given and I admire them for that and want to say 'thank you'.

It might be in poor taste to air Aaron's dirty laundry here. But I feel like he would have preferred the unvarnished truth. Putting him on a pedestal or writing him off as crazy (or an addict) misses the point of the Aaron I knew entirely.

The star that shines twice as bright only burns half as long I guess.

I wish Aaron had been more candid with me when he was still here. I wish I had reminded him more often that I admired him and that I cherished his friendship.

He was reluctant to ask for my help, but I wish I had been more generous with my support anyway. There were times that I knew he needed it.

Aaron and I always had a pact. No matter how much time had passed, no matter what had gotten in the way, we agreed to skip the excuses and apologies. We just picked up where we left off and got back to the interesting conversation.

I will never meet anyone like Aaron again. I wouldn't be me if I hadn't met him when I did. I've been carrying him around since grade school and he'll be right here when I see him again on the other side.